The El Centro Zone is bordered by Dos Quabradas porphyry in the North and La Cumbre porphyry in the South and it is comprised of three targets, El Cedral to the East, Manzanillo to the West and La Leguita in the middle. 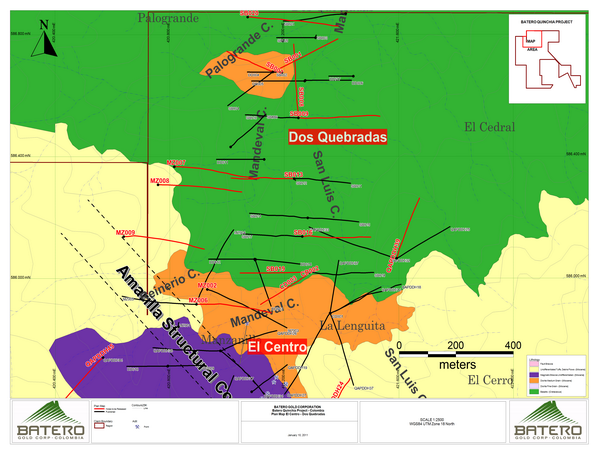 The Company will define the size and extent of the near surface high grade gold epithermal mineralization in and adjacent to the Amarilla Structural Corridor, which is contiguous to the eastern boundary of La Cumbre porphyry. Further to defining the higher grade gold oxidation zone, in 2012 the Company will test the continuation of this mineralized horizon to the east beyond the eastern contact of La Cumbre porphyry past the Amarilla Structural Corridor to the under explored area at El Cedral. Initial prospecting in this area confirms an extensive oxidation horizon with anomalous gold-in-soil anomalies.

La Lenguita is situated 500m northeast of La Cumbre and is an exploration drill target area. La Lenguita's geomorphology is characterized by a landform feature trending greater than 300 metres (long axis) and comprised of pervasive silicification and potassic alteration.

Six drill holes have been released at La Lenguita located approximately 850 meters south of the Dos Quebradas porphyry and approximately 500 metres east of Manzanillo's new discovery. Five of the six drill holes have intercepted gold and copper mineralization with significant intervals intercepted from near surface including a new discovery of high grade gold epithermal mineralization intersected at depth. These shallow gold and copper intercepts and new high grade discovery at depth will continue to be explored.

Porphyry-related mineralization discovered at La Lenguita may be expanded west approximately 500 metres to the new discovery at Manzanillo and north approximately 850 metres to the Dos Quebradas porphyry. This is significant as it demonstrates further evidence that porphyry-related mineralization may be linked between exploration target areas and the La Cumbre and Dos Quebradas porphyry centres.

Manzanillo is an exploration high priority target area. This area is located east of La Lenguita-San Luis and is approximately 600m x 600m in surface area defined by Batero's ground geophysics, geochemical sampling and field mapping. Manzanillo is associated with a Miocene intrusive center. This intrusive center is composed by dikes and stocks emplaced in intermediate to felsic volcanic rocks of the Miocene Combia Formation and in Cretaceous basalts.

Of significance, QAP-DDH-034 intersected from 9.7m below surface the highest grade interval at the project thus far from a zone of newly identified epithermal mineralization returning grades averaging:

The epithermal mineralization discovered at Manzanillo in drill hole QAP-DDH-034 potentially extends the Amarilla Structural Corridor's higher grade epithermal gold mineralization trend 600 metres to the NNW to Manzanillo from recognized epithermal gold mineralization recovered from approximately 600 metres of historic tunnels located in the central zone of the Amarilla Structural Corridor (see Figure 1 and Gold Mines Acquisition news release dated May 10, 2011). These significant, shallow gold intercepts are currently unbracketted, and will be delineated in the 2012 drill program.